Update at 11pm: This story was updated to reflect school board votes

The Dallas ISD board of trustees voted to formally join an existing multidistrict lawsuit challenging the governor’s order.

“It’s about the safety of our students, staff and families,” board chairman Ben Mackey said. “We just have to do what is right and make our voice heard in this demand is critical to us.”

Meanwhile, the Fort Worth school board adopted a mask mandate, but an ongoing legal battle complicates when it can be implemented.

DISD Superintendent Michael Hinojosa was the first to officially challenge Abbott and require masks on campus. He said it was necessary to protect students and staff, including those too young to be vaccinated, as COVID-19 cases, driven by the highly contagious delta variant, increase.

“Until there is an official court order applying to the Dallas Independent School District, we will continue to have the mask mandate,” Hinojosa said when announcing his decision to continue enforcing the requirement.

Before DISD administrators began discussing business openly at Thursday’s meeting, he became distracted. Dozens of people protested in opposition to the warrant and refused to wear face coatings after Mackey reminded them it was district policy to demand masks on DISD property.

When administrators went into closed session, security helped clean up the people’s room, including some who called the board members “tyrants”. One man was wearing a shirt that said “Allergy without masks to tyrants.”

They argued that administrators should not go against Abbott’s order or challenge Attorney General Ken Paxton.

As the closed session lasted for an hour, tensions grew in the lobby. When the trustees said they wanted to hear each person’s public comments one by one, the crowd began to sing, “Let us in!” and “All lives matter!”

The patrons ended up hearing public comments via a live broadcast, while people were talking in an adjacent room.

As he watched Elena Jaxon, the mother of a first-year DISD student, she thought, “They are not children. It’s about her rights. ”She feels safer by sending her daughter to school with a mask.

Samantha Yanielo, another mother, came to speak out against a mask warrant, saying few children have died of COVID-19 in Dallas. He said his children’s masks come home “wet and wet”.

He said it was “incredibly ruled out” that the board would not receive news from the public.

The debate over masks continues in schools across Texas. Highland Park administrators, for example, are expected to consider changes to their protocols, including the mask requirement, during a Saturday meeting, according to an agenda.

In Fort Worth, trustees voted 8-0-1 to re-adopt a mask mandate. Trustee Daphne Brookins abstained from the vote citing an appointment with the state.

The district had briefly had a mask warrant previously, but was arrested by a court order issued after a group of parents sued the district. Earlier Thursday, a judge extended that temporary restraining order until Sept. 3, when Judge John Chupp held another hearing.

Superintendent Kent Scribner said he can only implement the new mask warrant once the court order has been lifted. Meanwhile, Fort Worth will continue with its current protocols that do not include mask requirements, he said.

Fort Worth school bosses said they wanted to have a mask warrant to stay in the fight to protect their students. Doctors at Cook Children’s Medical Center noted that they have urged the district to implement appropriate health and safety protocols.

The board has been tasked with making many difficult decisions to respond to the pandemic that will hit the new school year, said Trustee Anne Darr.

“It’s like pushing a big old rock toward an incline that makes about 85 degrees,” Darr said. “It’s a huge task … the burden is on the public schools to make that happen.”

Speakers have flooded Fort Worth ISD board meetings in recent weeks. Father Max Krochmal noted Thursday night that schools celebrate historic leaders, such as civil rights leaders Martin Luther King Jr. and Cesar Chávez. If the district cannot stand up for what is right to protect its students, it should not have parties celebrating historic leaders who have made a difference, he said.

“We try to teach our students to follow their example and do what is right no matter the cost,” Krochmal said. “You have this opportunity. You alone can protect our children. The rest is just noise.

Dr. Catherine Hees, a gynecologist and obstinate obstetrician, told the board that to keep children healthy, they need to have fresh, sunny air, rather than a mask.

Masks cause “fear, stress, fatigue and headaches,” Hees told the board.

In recent weeks, children’s hospitals in the area have reported an increase in young people admitted due to coronavirus. The Centers for Disease Control and Prevention, as well as the American Academy of Pediatrics, recommend the universal use of masks in schools regardless of a person’s vaccination status.

Speaker Ian Cardin urged administrators to listen to the science about masks and how students can benefit from wearing them. All security measures that were put in place last year must remain so that students can return to school safely, he said.

“Call a vote and vote with the compassion everyone deserves,” Cardin said.

The struggle to see if local leaders should be empowered to institute mask mandates is tied to the courts, both at the state and federal levels.

Judge Tonya Parker’s decision to issue an interim measure is likely to be appealed, first to the Dallas Fifth Court of Appeals and then to the Texas Supreme Court, before a final decision is made on the case.

A federal lawsuit, filed by Disability Rights Texas on behalf of students with special needs, is scheduled for trial in October.

Meanwhile, Paxton has pledged to sue all districts that require masks in disagreement with Abbott’s order. 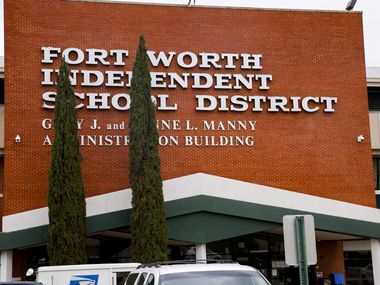 The DMN Education Lab delves into coverage and conversation on urgent educational issues that are crucial to the future of North Texas.