As the opening weekends unfold, the Big 12 didn’t go bad.

The league went 9-1. And while West Virginia lost to Maryland in a power-five conference team battle, the state of Kansas defeated Stanford at AT&T Stadium and then BYU defeated Ariz …

Wow, it’s not that fast.

BYU is not in the league, at least not yet.

As fascinating as the games may be, the Big 12 may be offering more this week. Several industry sources have indicated that the conference is ready to add BYU, Cincinnati, Central Florida and Houston this month and most likely over the weekend, if there are no speed bumps.

“I love that everyone talks about BYU this week,” BYU athletic director Tom Holmoe said on the school’s football program, but he didn’t want to go into too much detail.

According to reports, the Big 12 board will meet Friday to discuss the expansion with the pending Texas and Oklahoma exit to the SEC.

Will there be withholdings? Presidents have yet to be informed and discuss additions that have been approved by a Big 12 working group and conference announcements.

And if there are reservations, what are the alternatives?

For now, everything seems to be on the way to expanding.

Here are some observations from week 1:

First and foremost: Despite all the talk about the quarterbacks, new Texas coach Steve Sarkisian maintained that the offense would be built around the second year, Bijon Robinson. He was true to his word. Robinson averaged 7.3 yards on 24 touchdowns and was named Walter Camp’s national offensive player of the week.

Most welcome win: Given the overall implications, take Texas Tech’s 38-21 victory over Houston. Coach Matt Wells needed a quick start after four consecutive seasons, but bounced back 21-7 at the break. The Buzzards were starting to make online circles. Even worse, Houston coach Dana Holgorsen had been a favorite of tech-savvy fans when she was hired at Wells. Tech then shot in the second half. “He was proud of our players for the way they came out of the break, their endurance and they never hesitated,” Wells said.

About this Oklahoma defense: Just as the Sooners were about to turn the page on bad defensive narrative, a 40-35 run against hurricane-displaced Tulane revived it. “I think the main disappointment is obviously that you say,‘ Well, what expectation? The expectation is to play better, “Alex Grinch, the OU’s defensive coordinator, told reporters.

Run the game return: Baylor’s 29-20 victory over Texas State showed the vision of new offensive coordinator Jeff Grimes and marked a bit of redemption for the offensive line. After Baylor ran just 90 yards per game last season, the Bears ran 238 yards at the opening. “No matter how many yards we would have rushed, they know the exact number,” coach Dave Aranda said on the offensive line.

New season, the same struggle: You definitely don’t want to see Iowa State and Matt Campbell on your schedule in October or November. If it’s September, you’re sure to take a risk. After losing to Louisiana-Lafayette in the opening game last season, the Cyclones fought their first player again, beating FCS Northern Iowa opponent 16-10. Iowa State will have to accelerate next week for Iowa, a team that Campbell has yet to beat in its remarkable construction process.

Don’t sleep at K-State: Kansas State’s 24-7 win over Stanford showed that the Wildcats are a very different team than the one that staggered the stretch in 2020. While the return of quarterback Skylar Thompson is a big advantage, a defense that kept Stanford at 233 yards made a statement.

Fighting the elements: With TCU leading 35-0 at the break, Duquesne, outscored, called for a shortened second half. “They asked us to go down for up to 12 minutes and I agreed,” TCU coach Gary Patterson said. “They had about five or six boys away from home, so I think the heat affected them.”

Let’s hear it from … Kansas: Yes, new coach Lance Leipold got a win in his first game, beating the FCS member in South Dakota 17-14. It was the Jayhawks’ first victory in 677 days. 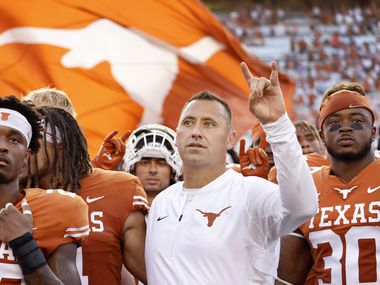